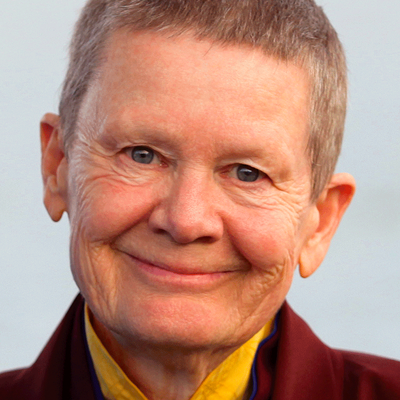 The live event has concluded. Register to access the recording.  On Sunday, May 17, Ani Pema held an open Q&A with Shambhala members about working with the chaos, impermanence and uncertainty of living within a global pandemic.

Sunday Gatherings are presented in English and are live every week at:

Make A Donation
These events are offered free of charge to Shambhala members. If it is possible for you to make a donation to support the presenters and production staff that make Sunday Gatherings possible, please click here.

Registration
Register below for each upcoming talk. A Zoom link will be sent to you after registration.

Pema Chödrön was born Deirdre Blomfield-Brown in 1936, in New York City. She attended Miss Porter’s School in Connecticut and graduated from the University of California at Berkeley. She taught as an elementary school teacher for many years in both New Mexico and California. Pema has two children and three grandchildren.

While in her mid-thirties, Pema traveled to the French Alps and encountered Lama Chime Rinpoche, with whom she studied for several years. She became a novice nun in 1974 while studying with Lama Chime in London. His Holiness the Sixteenth Karmapa came to England at that time, and Pema received her ordination from him.

Pema first met her root teacher, Chogyam Trungpa Rinpoche, in 1972. Lama Chime encouraged her to work with Rinpoche, and it was with him that she ultimately made her most profound connection, studying with him from 1974 until his death in 1987. At the request of the Sixteenth Karmapa, she received the full monastic ordination in the Chinese lineage of Buddhism in 1981 in Hong Kong.

Pema served as the director of Karma Dzong, in Boulder, until moving in 1984 to rural Cape Breton, Nova Scotia to be the director of Gampo Abbey. Chogyam Trungpa Rinpoche asked her to work towards the establishment of a monastery for western monks and nuns.

Pema currently teaches in the United States and Canada and plans for an increased amount of time in solitary retreat under the guidance of Venerable Dzigar Kongtrul Rinpoche.

Pema is interested in helping establish the monastic tradition in the West, as well in continuing her work with Buddhists of all traditions, sharing ideas and teachings. She has written several books: “The Wisdom of No Escape”, “Start Where You Are”, “When Things Fall Apart”, “The Places that Scare You”, “No Time to Lose” and “Practicing Peace in Times of War”, and most recently, “Smile at Fear.”

Shambhala Online is self-supporting. Your generosity in making a donation so that we may continue to offer free programs is greatly appreciated!